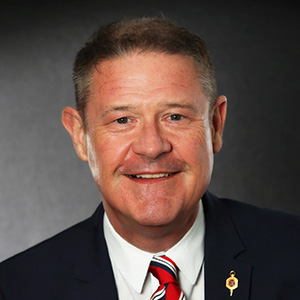 Tim serves as the vice president and co-owner of Raybourn Group International.

His 20+ year career in professional association management began when he was named Executive Vice President and CEO of Tau Kappa Epsilon International Fraternity, the world’s largest collegiate men’s fraternity with 320 chapters and 240,000 members. There he led his staff and volunteer team to create new effective volunteer, member recruitment and professional development initiatives.

Experienced in leading individual membership, professional and trade associations, Tim has been a proven leader in all aspects of association leadership, especially in areas of member services, Board governance, volunteer engagement, strategic planning and conference and convention strategy. Prior to engaging association management as his profession, Tim was vice president and managing partner of a multi-location funeral home enterprise in his native northeast Ohio.

He also remains an active alumnus member of the great Tau Kappa Epsilon International Fraternity (TKE), where he was the 2015 recipient of The Order of the Golden Eagle, the Fraternity’s highest award; and is a member (Inhalte die Cospsschleiffe) of the Corps Franconia Darmstadt, one of the oldest collegiate fraternal societies in Deutschland; Past Master of his Masonic Lodge; Past Commander-in-Chief of the Ancient Accepted Scottish Rite of Freemasonry;  Past Potentate of Murat Shriners; the Honorable Order of Kentucky Colonels; the Columbia Club of Indianapolis, the Indy Boxing Club; and is a member of the Board of Directors of the Indiana Funeral Education Foundation.

He and his lovely wife of more than 20 years, Leslie, reside on Indy’s north side with their cocker spaniel Casey Irene.